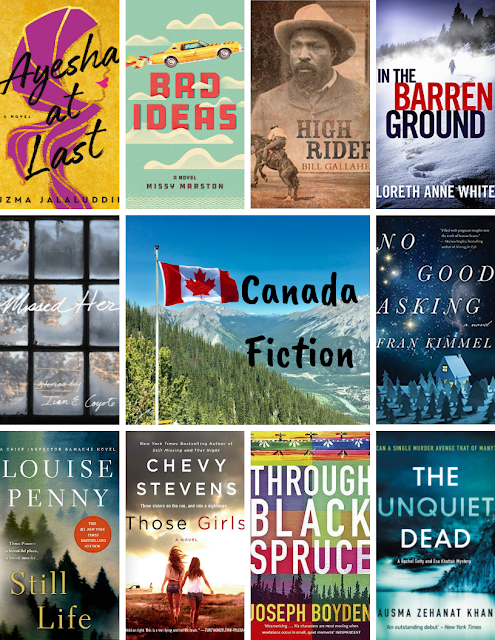 Happy Canada Day!  Canada Day celebrates the anniversary of July 1st, 1867, the day the Constitution Act united the colonies of the Province of Canada, Nova Scotia, and New Brunswick into Canada.  Here are 10 novels with settings in Canada.

Ayesha at Last by Uzma Jalaluddin - Ayesha Shamsi has a lot going on. Her dreams of being a poet have been set aside for a teaching job so she can pay off her debts to her wealthy uncle. She lives with her boisterous Muslim family in Toronto and is always being reminded that her flighty younger cousin, Hafsa, is close to rejecting her one hundredth marriage proposal. Though Ayesha is lonely, she doesn't want an arranged marriage. Then she meets Khalid who is just as smart and handsome as he is conservative and judgmental. She is irritatingly attracted to someone who looks down on her choices and dresses like he belongs in the seventh century. When his engagement to Hafsa is announced, Ayesha must deal with the truth about Khalid, her family... and herself.

Bad Ideas by Missy Marston - Wildly funny and wonderfully moving, Bad Ideas is about just that -- a string of bad ideas -- and the absurdity of love
Trudy works nights in a linen factory, avoiding romance and sharing the care of her four-year-old niece with Trudy's mother, Claire. Claire still pines for Trudy's father, a St. Lawrence Seaway construction worker who left her twenty years ago. Claire believes in true love. Trudy does not. She's keeping herself to herself. But when Jules Tremblay, aspiring daredevil, walks into the Jubilee restaurant, Trudy's a goner.
Loosely inspired by Ken "the Crazy Canuck" Carter's attempt to jump the St. Lawrence River in a rocket car, and set in a 1970s hollowed-out town in eastern Ontario, Bad Ideas paints an indelible portrait of people on the forgotten fringes of life. Witty and wise, this is a novel that will stay with you a long time.

High Rider by Bill Gallaher - From a South Carolina slave to one of the most successful ranchers in Canadian history, John Ware was known for his incredible strength of character and sheer force of will.
Georgetown, 1867. Twenty-two-year-old John Ware knows there is no future for him in post-abolition South Carolina. In the hope of finding work on a cattle ranch in Texas, he makes the thousand-mile trip by foot, skirting lynch mobs along the wartorn way. His talent for breaking mules lands him a job near Fort Worth, where he stays for a decade learning the cowboy trade.
But when opportunity knocks, John heads north to Canada as a cattle drover, and although he must confront racist trouble-makers, contend with shady business deals, and even suffer the tragic loss of close friends, John presses on. The true story of John Ware has finally been brought to life in this fictionalized portrait of one of history’s unsung heroes.

In the Barren Ground by Loreth Anne White - In the Barrens, a vast wilderness in northern Canada bordering the Arctic Circle, night consumes every hour of the winter. Humans are scarce; ferocious predators roam freely. Locals say spirits do, too. Rookie cop Tana Larsson doesn't mind the dark and quiet. Five months pregnant and hoping to escape the mistakes of her past, she takes a post in Twin Rivers, population 320. Maybe here she can find peace and community for her child. But with her superior out of commission, Tana becomes the sole police officer in 17,500 square miles. One bitter night, she gets a call about the fatal wolf mauling of two students, and the only way to reach the remote scene is to enlist the help of the arrogant, irritatingly handsome Cameron "Crash" O'Halloran, a local bush pilot with a shady reputation for smuggling and a past cloaked in shadow. When the macabre scene they uncover suggests violence much more sinister than animal, Tana must trust Crash if she wants to protect the town--and herself--from the evil that lurks in the frozen dark.

Missed Her by Ivan Coyote - Ivan E. Coyote is a master storyteller and performer; their beautiful, funny stories about growing up queer in the Canadian north and living out loud on Canada's west coast have attracted big audiences, whether gay, straight, trans, or otherwise. In their passionate and humorous new collection, Ivan takes readers on an intimate journey, both literal and figurative, through the experiences of their life: from their year spent in eastern Canada, to their return to the west coast, to travels in between. Whether discussing the politics of being butch with a pet lapdog, befriending an effeminate young man at a gay camp, or revisiting a forty-year-old heartbreak around her grandmother's kitchen table, Ivan traverses love, gender, and identity with a wistful, perceptive eye and a warmth that's as embracing and powerful as Ivan themself.

No Good Asking by Fran Kimmel - A profoundly moving exploration of our capacity to heal one another. Ellie and Eric Nyland have moved their two sons back to Eric's childhood farmhouse in western Canada, hoping for a fresh start. But there's no denying it, their family is falling apart, each one of them isolated by private sorrows, stresses, and missed signals. With every passing day, Ellie's hopes are buried deeper in the harsh winter snows. When Eric finds Hannah Finch, the girl across the road, wandering alone in the bitter cold, his rusty police instincts kick in, and he soon discovers there are bad things happening in the girl's house. With nowhere else to send her, the Nylands reluctantly agree to let Hannah stay with them until she can find a new home after the Christmas holidays. But Hannah proves to be more balm than burden, and the Nylands discover that the only thing harder than taking Hannah in may be letting her go.

Still Life by Louise Penny - Chief Inspector Armand Gamache of the Surêté du Québec and his team of investigators are called in to the scene of a suspicious death in a rural village south of Montreal. Jane Neal, a local fixture in the tiny hamlet of Three Pines, just north of the U.S. border, has been found dead in the woods. The locals are certain it’s a tragic hunting accident and nothing more, but Gamache smells something foul in these remote woods, and is soon certain that Jane Neal died at the hands of someone much more sinister than a careless bowhunter.  Book 1 of 15 in the Chief Inspector Gamache series

Those Girls by Chevy Stevens - Life has never been easy for the three Campbell sisters. Jess, Courtney, and Dani live on a remote ranch in Western Canada where they work hard and try to stay out of the way of their father's temper. One night, a fight gets out of hand and the sisters are forced to go on the run, only to get caught in an even worse nightmare when their truck breaks down in a small town. As events spiral out of control they find themselves in a horrifying situation and are left with no choice but to change their names and create new lives.
Eighteen years later, they are still trying to forget what happened that summer. But when one of the sisters goes missing, followed closely by her niece, they are pulled back into the past. And this time there's nowhere left to run.

Through Black Spruce by Joseph Boyden - Will Bird is a legendary Cree bush pilot, now lying in a coma in a hospital in his hometown of Moose Factory, Ontario. His niece Annie Bird, beautiful and self-reliant, has returned from her own perilous journey to sit beside his bed. Broken in different ways, the two take silent communion in their unspoken kinship, and the story that unfolds is rife with heartbreak, fierce love, ancient blood feuds, mysterious disappearances, fires, plane crashes, murders, and the bonds that hold a family, and a people, together. As Will and Annie reveal their secrets-the tragic betrayal that cost Will his family, Annie's desperate search for her missing sister, the famous model Suzanne-a remarkable saga of resilience and destiny takes shape.

The Unquiet Dead by Ausma Zehanat Khan - Detective Esa Khattak is in the midst of his evening prayers when he receives a phone call asking that he and ... Detective Rachel Getty look into the death of a local man who has fallen off a cliff. At first Christopher Drayton's death--which looks like an accident--doesn't seem to warrant a police investigation, especially not from Khattak and Rachel's team, which handles minority-sensitive cases. But it soon comes to light that Drayton might have been living under an assumed name, and he may not have been the upstanding Canadian citizen he appeared to be. In fact, he may have been a Bosnian war criminal with ties to the Srebrenica massacre of 1995.  Book 1 of 5 in the Rachel Getty and Esa Khattak series
Posted by Librarian K at 7:02 AM